Me and Laddie John Dill!

During the Bakersfield Museum of Art Small Works Juried Exhibition, I got to hang with juror Laddie John Dill! The anticipation during the awards ceremony was grueling, but the result was grand. As Laddie was discussing why he chose my work for the award my mind was racing. He turned the mike over to the second place winner, Betty Finch to ask about her process in making her fanciful gourd work. All I could think about was please don't turn the mike over to me. Now, I'm not one to shy away from public speaking opportunities, but for some reason I thought please not now. Well, Laddie must have noticed the fright in my eyes and the fact that my face and ears turned bright red and spared me from a case of stage fright.

Thank you Barbara Reid (another artist included in the small works show) for purchasing my favorite little baby piece on the right "Falling" and taking the photograph below (if you look closely at my neck you can see how red I am - thus the reason I included her very cool, combo black and white/color photo): 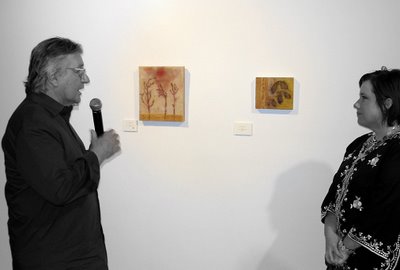 How do you do that?

The most common comment about my work is “Is that wax?” followed by, “How do you do that?” I have a short spiel that I have refined that goes something like this: “The medium is called encaustic spelled e-n-c-a-u-s-t-i-c. The medium is made out of beeswax with dammar resin which is tree sap. Encaustic is a molten process which means I have to heat the medium on a hotplate and use a heat gun to fuse each layer of wax to the next layer. I paint with the encaustic using brushes like you would oil or acrylic.” If the person looks intrigued or like they want to know more I will give a little more detail on history of the medium as well as describe details from the pieces I have displayed.

What do you think? Do you have any suggestions for improvement?

I recently became a member of the West Coast Encaustic Artist group. It is a budding organization that is working at helping each other network, get gallery shows and lecturing opportunities.

I have also been researching artist residencies and grant opportunities. I will start posting the opportunities I find interesting.

Join this: Women's Caucus for Art

A celebration is in order and a big Thank You to the Bakersfield Museum of Art for hosting a small works exhibition open to all California artists. Each year they up the caliber of jurors. Last year’s jurors were curators of the San Luis Obispo and Fresno Art Museum. This year the jurors were well respected artists from Los Angeles. The show was heavily populated by local entrants due to the submission guideline of bringing in the artwork as opposed to the usual submission of slides. The show gave the locals a chance to have their work viewed by an outside eye…a good way to give feedback without the murmur of “Oh, they won because they are a local darling of the arts!”

One local artist, A.S. Ashley, pouted outside the museum in a performance protest with his big artwork. I’m sure you are familiar with his work as you have seen the work at Barnes and Noble and in multiple shows at The Empty Space Gallery, well those were the same pieces propped up in the back of pick-up trucks. He stated, "I'm waiting for the big show!" I think he was waiting for another “Big Repeat” show! I did give him a phone call to remind him to get off his little duff and submit something to the show. He whined about how he doesn’t work small and that he didn’t want to participate. As I walked into the small works show, he sat there with his cowboy hat and lawn chair hoping for someone to pay attention to him. I told him I would come out and pay attention to him later and walked into the show for the awards ceremony.

Well, later didn’t come soon enough as the curious A.S. walked into the show to give me some whiney love. He congratulated me for my “Best of Show” award like a gentleman and spent some time chatting with me and Betty Finch (a superb artist making fanciful creatures out of gourds) also the second place winner of the show. All three prize winners were local and given generous financial awards. There were 270 entrants and the jurors selected about 25% from the entries. This was a hat tip to the local artists as the jurors judge the artwork without knowing the name or location of the artist. Thank you Bakersfield Museum of Art for opening up your prime wall space to local emerging artists!
Posted by Julia at 12:24 PM 3 comments:

You Must Feel So Violated.

“You must feel so violated!” was the number one response as I reported to my friends, family and co-workers of my recent burglary. After my performance in Brittany Spears’ former mansion, prancing around with boobie bravado in front of Rob Thomas (Dawson’s Creek and Veronica Mars…yes, I am name dropping!), his wife and a smattering of friends I came home to my fondled and raped home. In the ancient language of cat, my little one described in great detail the invasion down to the specific comments made by the perps about the state of my pig sty I call home. Yep, I was robbed of all things of perceived value (computer, stereo, cameras, jewelry etc…) but my response wasn’t to the missing items. Electronics can be replaced, but they touched, pushed and ripped through everything in my home…they didn’t leave anything free from their fingering. I waited 9 hours for our finest guardians of all that is good in Bakersfield to knock at my door to hear, “Yep…they were here for a long time. Here is your report number…” That was it. He didn’t even pull out his rape kit. Nope, just sorry…not sure if others have been violated in your quaint little central neighborhood, this isn’t “my beat.” So, I avoided the retelling of the violation because I just wanted to suppress it, bury it deep…which I successfully did until today. As I stood at my sink washing my dishes I broke down in tears. Those fucking assholes saw how filthy my kitchen was.
Posted by Julia at 11:20 PM 3 comments: